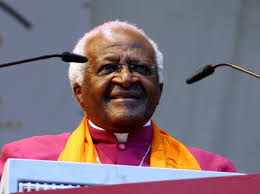 On 10 September 2014, an op-ed article by Likud SA chairman Leon Reich was published by the South African JewishReport (SAJR). This article compared Nobel Peace Prize laureate Archbishop Emeritus Desmond Tutu, to Nazi leader Adolf Hitler. An image of Desmond Tutu’s face with a ‘Hitler-style moustache’ drawn onto it, was superimposed over Tutu’s face.

As South African Jews, we are hurt by this article and reject in the strongest terms the utterly false and hateful words directed against a man who is regarded as a beacon of morality by the majority of South Africans, including ourselves.

To add insult to injury, in a radio interview with Tim Modise, Leon Reich refused to apologise for his comparison.

As such, South African Jewish Voices for a Just Peace(JVJP-SA) voted to lodge a complaint with the South African Human Rights Commission (SAHRC). This complaint was formally lodged on 1 October 2014.

Leon Reich does not speak for the majority of South African Jews, and yet the South African Jewish Report (SAJR) saw fit to publish his article. The SAJR issued a formal apology after the article was removed following a public outcry. However, on the same day, the editor of the SAJR published an article online which effectively negated his apology.

You can also contribute to keep JVJP going,
Email us for more information