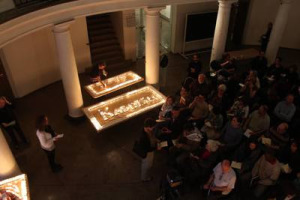 On the 7th September 2014, members of South African Jewish Voices for a Just Peace (JVJP) took turns to read out the names of the many children lost in the recent Palestinian- Israeli conflict, as those attending this memorial service settled into the scheduled program of events. Two thousand flickering tea candles were arranged to represent those who were killed.

Then, as the last names were being read out, the heat from the candles resulted in a sudden and unexpected upsurge of flames. Dousing it with water caused a small explosion, causing the audience to draw back in shock. The blaze was finally put out with a fire extinguisher.

A major aim of this event and memorial was to better grasp the depth of suffering that people in Gaza had endured. To this end, the names of the dead children were intoned, candles lit and poems read. Such plotted contrivances are necessarily limited and what evoked the experience of those in Gaza even better than anything that was planned, was the unexpected upsurge of flames.

The event continued with Professor Rafael Winkler’s examination of the concept of forgiveness. Reconciliation requires forgiveness from the party who has been wronged, but one has to wonder, how can one be forgiven for killing a child? And if forgiveness is expressed, what can it possibly mean in the context of such a devastating loss?

This analysis was followed by Jess Sherman’s stirring rendition of Mi Shebeirach, a prayer of healing calling for the “healing of nations”.

Rabbi Shaked was called on to lead the Kaddish (Jewish prayer for the dead). He prefaced the prayer by explaining its role in assisting mourners to accept the finality of death even when it is so utterly inexplicable.

The last speaker was Mr Tamer Almassri, a staff member of the Palestinian Embassy who had lost eight members of his family in Operation Protective Edge. Despite these personal tragedies, Mr Tamer Almassri’s natural warmth belied all caricatures propagated by Islamophobia and popular Zionist discourse.

You can also contribute to keep JVJP going,
Email us for more information